With gold rising last week by $50, more big banks and investment advisors are getting on the gold bandwagon. Reuters recently spoke to nine private banks, which oversee a combined $6 trillion in assets for the world’s richest clients, and most have advised clients to increase their allocation to gold, partly since gold is the only major asset class to rise in 2020. Four of the banks added forecasts of higher gold prices. 1st American Reserve wants you to be aware of this advise.

Morgan Stanley added a 5% position to commodities including gold as of March 31. While the bank said it is unlikely to advise a position above 10% in commodities, Lisa Shalett, the Chief Investment Officer of Wealth Management at Morgan Stanley, said they “could get there,” especially if inflation picks up materially. “Our view is that the weight of monetary supply expansion is going to ultimately be debasing to the dollar, and the Fed commitments, which (are) anchoring real rates, make the case for gold pretty sturdy.” Super-rich investors, said Shalett, are “very concerned about wealth preservation and, in many ways, they have a longer historic lens than some of our other clients, so they do worry about inflation.”

UBS of Switzerland, the world’s biggest wealth manager, said that gold could hit $1,800 by year-end in their “base-case scenario,” due to ultra-low interest rates and investors seeking gold to hedge their portfolios, but they added that gold could reach a record high of $2,000 in the event of a second wave of coronavirus infections. UBS’ Kiran Ganesh said, “With the recent equity rally, people have become more nervous. People are actively seeking portfolio hedges that might perform well in a range of scenarios.”

Also, Wells Fargo’s head of real asset strategy at their Investment Institute, John LaForge, said, “I’m now getting as many questions on gold as I do on oil, which says a lot from my perspective.” And Oliver Gregson, head of the United Kingdom and Ireland at JPMorgan Private Bank said inquiries had gone up as clients increasingly viewed gold as “a port in a storm.” He forecast a $1,750 year-end target for gold.  Call your experienced “Team Mike” representative to learn more!

The recent significant increase in the price of gold may increase the chances of unwary buyers and sellers becoming victims of dishonest dealers, cautioned Michael Fuljenz, an award-winning precious metals writer known as America’s Gold Expert®.

“It happens virtually every time there’s a run up in gold and silver prices.  Scam artists take advantage of investors and consumers who have not done their homework,” warned Fuljenz. 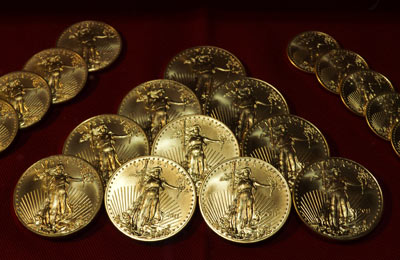 “Last year when gold and silver prices dropped, there was still so much public demand that the United States Mint ran out of some bullion coins inventory several times.  I anticipate demand will rise even higher from 2015’s impressive levels.  Investors should know how to get more value when buying and more money when selling,” Fuljenz stated.

He said there are five danger points to avoid:

“Before you buy or sell with a dealer, check to see the dealers’ credentials.  Are they accredited by the Better Business Bureau?  Are they truly experts, such as being a member of the Professional Numismatists Guild’s Accredited Precious Metals Dealer (APMD) program,” advised Fuljenz.

Michael Fuljenz has won more than 50 prestigious national and regional awards and honors for his consumer education and protection work in rare coins and precious metals, including Book of the Year. He has taught counterfeit detection classes at American Numismatic Association seminars, and was recently was awarded an Honorary Doctorate in Humane Letters by McNeese State University. A respected community leader in his hometown of Beaumont, Texas, Mike also has served with distinction as a consultant to the Federal Trade Commission, United States Mint and Royal Canadian Mint, and is on the Boards of Directors of the influential Industry Council For Tangible Assets, and Crime Stoppers of Beaumont, Texas.

1st American Reserve thinks this is an article you absolutely should read:
According to an article in last Thursday’s Wall Street Journal (“Scramble for Gold Redraws Market’s Map,” June 11), gold imports to New York from Switzerland and elsewhere have been massive over the last three months. As we’ve written here in the past, one major factor in the current gold shortage stems from the fact that major Swiss gold refiners were only sporadically open from March through May due to coronavirus fears - three of the four major gold refiners were in the southern, Italian-speaking Swiss cantons, near northern Italy, which was hard hit by the coronavirus. 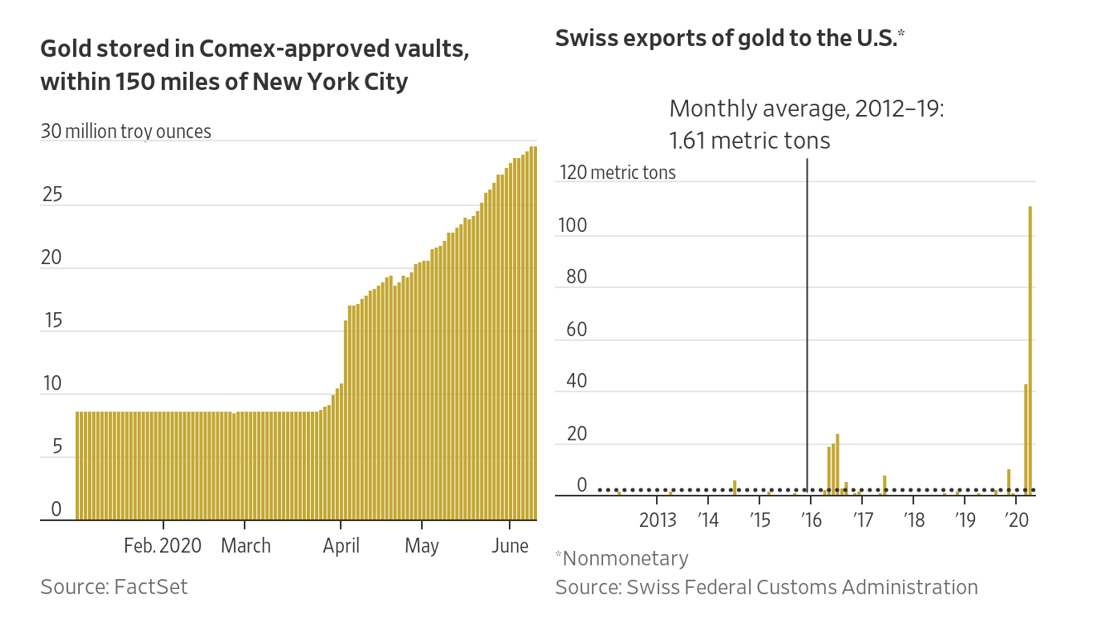 The Comex division of the New York Mercantile Exchange is required to hold physical gold to back each new share of gold ETFs that investors buy. Due to stocks falling sharply, demand for gold ETFs nearly quadrupled. Gold in Comex vaults within 150 miles of New York City rose from about eight million Troy ounces (250 metric tons) to almost 30 million troy ounces of gold (over 900 metric tons), according to FactSet. The Journal says that rise in gold vaults is equal to nine fully-loaded Boeing 737-700 airliners. Since commercial flights out of Switzerland were limited during those months, the Journal said private charters by logistic firms flew that gold from Europe to New York.

Stocks are now going up and down rapidly – more rapidly than at any time since the 89% decline from 1929 to 1932, followed by a rapid 93% recovery during the summer of 1932.  So far, the year 2020 is a year of unprecedented volatility – the widest price swings since 1929-1933. That’s all the more reason why investors are turning to gold – the only investment that went up during the troubled 1930s.  To learn more about how to properly invest in gold, call our friendly and experienced account representatives that are the heart of Team Mike!

You could say that Congress and the Federal Reserve are beginning to “go crazy” with the printing press. The parade of stimulus packages brought forth by the Federal Reserve and Congress are on course to add as much as $10 trillion in new money and new debt when all is said and done. Much of it seems to be a cynical attempt to “buy votes” this November, since they are sending out stimulus checks to people who are still working, while not even asking those businesses and workers to send in their regular taxes yet!

The official estimate for this year’s federal deficit is $3.8 trillion – more than triple the previous record – and it may go much higher than that. The total U.S. debt has risen $2.5 trillion in the first four months of this year, from $23.2 trillion in January to $25.7 trillion in May. The latest “stimulus” bill being pushed through the Senate by spendthrift Democrats is called the Monthly Economic Crisis Support Act. It was introduced by Senators Kamala Harris (D-Calif.); Bernie Sanders (Ind-Vt.); and Ed Markey (D-Mass.) The bill calls for sending $2,000 per month to individuals, $4,000 to couples, plus $2,000 per child up to three children. That’s $10,000 for a family of five, or $120,000 per year, although payments would be reduced for those families earning over $100,000. Have we ever seen such a blatant giveaway before?

At the same time, the Federal Reserve Chairman Jerome Powell is promising total giveaways to banks for loans when he says, “When it comes to lending, we’re not going to run out of ammunition,” adding, “we will provide essentially unlimited lending to support the economy.” That’s a promise of unlimited money.

Although we’re not at war, this situation promises the same kind of runaway inflation we saw in the Revolutionary War, when General George Washington complained that the paper “Continentals” the Congress had issued had become worthless: “A wagonload of continentals can’t buy a wagonload of provisions,” he complained. We saw similar inflations during World War I and II and after Vietnam.

When so much money is printed without backing, the limited amount of gold and silver left in circulation becomes more valuable, as it did in previous wartime inflationary periods.

For decades, China has been exporting a wide variety of counterfeit products, including bullion coins, rare coins and currency. A part of the problem has been the fact that we have had very little skilled oversight at the federal level. It’s a little-known fact, but under President Barack Obama, there was no nominated and confirmed Mint Director. Only when President Trump took office did he nominate a new Mint Director, David J. Ryder, who had previously served as Mint Director under George H.W. Bush.  Bush nominated him for that office in September 1992, and he served until November 1993, the first year under Bill Clinton.

In the 24 years between his two tenures as Director of the Mint, Ryder became an expert in counterfeit detection after he joined Secure Products in 1994. When the Honeywell Corporation acquired Secure Products in 2007, Ryder was Managing Director of Currency for Honeywell, where he developed and launched highly advanced anti-counterfeiting systems for both manual and high-speed authentication of currency, passports, bank checks, and other commercial products. Then, in 2017, President Trump nominated Ryder as Director of the United States Mint and he was confirmed on March 21, 2018.

The third factor in counterfeit protection is the dealer you choose. Some counterfeit coins are still being sold by dealers who are incapable of telling the difference between the real thing and the “near misses” produced by skilled counterfeiters. I taught grading and counterfeit detection for 20 years and am often called to consult with customers about suspicious coins bought from other dealers.

So, if you want to put the odds on your side, stick with David Ryder, Donald Trump and Team Mike.